You are here:
Bats

Bats will sometimes hibernate in your home during the winter months, from late fall until spring. Temperatures above 45 degrees is acceptable for a hibernation roost , and it is common for Big Browns to hibernate in homes and buildings. Rarely do we find  Little Brown bats hibernating in structures but it has been shown that they will also hibernate in structures.

Bats hibernating in homes may move roost positions within the structure, sometimes scratching or squeaking sounds will be heard when they are moving around. They may also find their way into basements for the winter hibernation period. The bats may even accidentally find their way into your living quarters during the winter months. This typically happens with either a rapid warming or cooling trend. I have also noticed that prior to or just after a snow storm bats may move around some.

Hibernating bats may respond to a sudden warm-up in outside temperature and some may be seen flying outside on warm winter nights. This will usually be a one night occurrence. Many houses that call with complaints about flying squirrels also have bats. It is believed that such houses have bats in the summer and flying squirrels in the winter, but it is possible both species can occupy the same space at the same time. Flying squirrels will eat bats that they find if they can get to them. 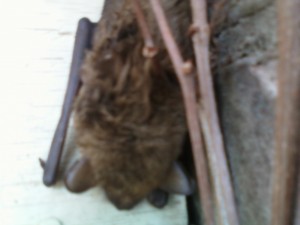 Here is a bat I found frozen this morning on a home in Guilford CT. I did not disturb it on the off chance it was still alive. Seems that the weather we are having this winter has our bat friends confused.

I did look at its muzzle, and could not detect any signs of White Nose Syndrome (WNS) a fungus that is killing off a huge amount of our bat population. WNS causes the bats to wake frequently from hibernation to clean it off. This burns up their much needed fat supply and basically they starve to death during winter.